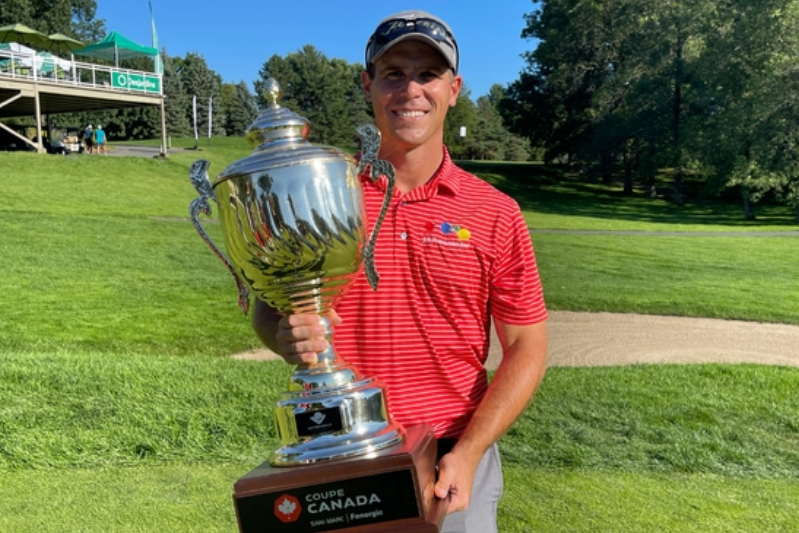 Quebecers save the best for last

Victoriaville, August 14, 2022 – Many competitors wanted to join Jake Scott at the top of the leaderboard in the last few days, but none of them managed to keep up with his pace on the fairways of Club de golf Victoriaville. Those present at the Centric club on Sunday were also able to witness several good performances by the 21 representatives of the province still in the race for the title, starting with Brandon Lacasse, who shot a round of 64 (-8). The American made sure to conclude his tournament in style on Sunday, leaving with the top honours of the Sani-Marc – Fenergic Canada Cup, presented by the City of Victoriaville.

Beyond the victory, there is the method. The Ohio native once again played a quality game at the conclusion of the event to bring his overall score to -24 (264), tying the tournament record set by Eric Banks of Nova Scotia in 2019.

"This win is the result of many, many efforts over the last few years and slowly it's starting to pay off," said a visibly emotional Scott as he left the course. "I've been working a lot on my swing, my course management, as well as a lot of other aspects of my game that have all come together over the last few days. It was amazing!"

Apart from a double bogey on the 17th, his third over-par hole this week, Scott was as consistent as clockwork in the final round, finishing at -3 (69). His playing partner Drew Nesbitt tried to build on a good start to cause trouble, but he could not keep up with his rival.

"I knew Drew was a great player and would fight all day, so I had to keep the pressure on," said Scott about his opponent who finished second at -21 (267).

"I had a slower start, and he quickly took advantage of it. Then I picked up my pace with four birdies in a row to finish the front nine and, luckily, I was able to keep a good lead to make up for a few mistakes and stay in the lead," continued the new champion with a laugh.

"It was really great! It's a special event, it seems like the whole city comes out to participate and cheer us on the course. It's one of my favourite tournaments of the year and I'm very happy to have been able to play some quality golf for the fans in the last few days," concluded the 34-year-old veteran before collecting the coveted trophy and the $25,000 purse awarded to the winner.

Rounding out the top-3 in the rankings was a familiar name to the Centre-du-Québec fans, Eric Banks. He played the best round of the tournament with a -10 (62) to move up nine spots and finish third at -20 (268).

Quebecers Shine at the End of the Tournament

Those present at the Victoriaville club on Sunday witnessed several good performances by the 21 representatives of the province still in the race for the title, starting with Brandon Lacasse, who shot a round of 64 (-8).

The Knowlton golfer moved up 14 spots to finish fourth, just as he did in 2021, but this time at -17 (271). "The goal of this tournament was to just stay calm and let my game speak for itself. I knew the game was good and I didn't want to get out of contention like I did at the Québec Open. This week, I managed my emotions better and it paid off in the end," said the man who is thinking big for the next few months.

"I still have several tournaments coming up, including the Q-School in Europe in early October. This kind of performance really gives me confidence for the future, and I can't wait to get back on the course!"

Lacasse was closely followed by a few of his compatriots on the leaderboard, including Étienne Papineau (Pinegrove) who tied for fifth at -16 (272) with a final round of -8 (64). Iannick Lamarre (Club Laval-sur-le-Lac) moved up to sixth place at -15 (273), one shot behind Max Gilbert (Saint-Georges), who tied for eighth at (275). 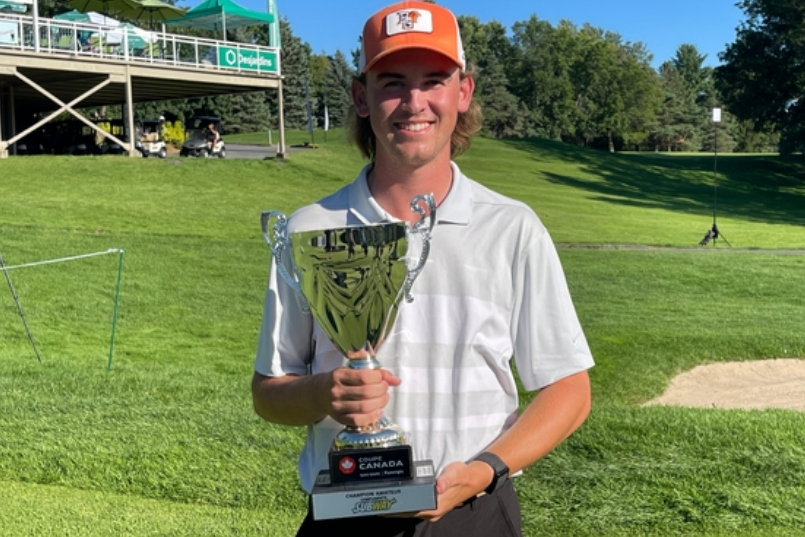 "Golf is like a marathon and I came here just wanting to play my best golf. I was thinking about the trophy all day and on the 18th my caddy told me to go for it without stress. It's a good feeling to win such a great tournament and I'm proud of myself for this achievement," said Rattray after his day's work.

A total of $125,000 was awarded at the end of the Sani-Marc – Fenergic Canada Cup, the largest independent tournament for Canadian professional golfers from the tours associated with the event: Vancouver Golf Tour, Great Lakes Tour, Toronto Players Tour, East Coast Pro Tour, PGA of Québec, PGA of Canada, and Golf Québec.

The Golf Québec team would like to thank the volunteers, the organization and all those who came to the Club de golf Victoriaville for this ninth edition of the Sani-Marc - Fenergic Canada Cup. Activities will now move on to Knowlton, where the Junior Match Play Championship will be held from Monday to Wednesday.

Founded in 1920, Golf Québec is the provincial sport federation whose mission is to increase participation in golf and develop excellence. Golf Québec provides discovery and introduction programs such as First Tee – Premier départ Québec as well as core services such as the Rules of Golf, Course Ratings, World Handicap System, and the Québec Golf Hall of Fame. In addition, Golf Québec conducts regional and provincial championships to bring the local golf enthusiasts to surpass themselves and eventually reach the upper spheres of professional tours. For more information, please visit https://www.golfquebec.org.