Jake Scott Cranks Up the Pressure on his Rivals 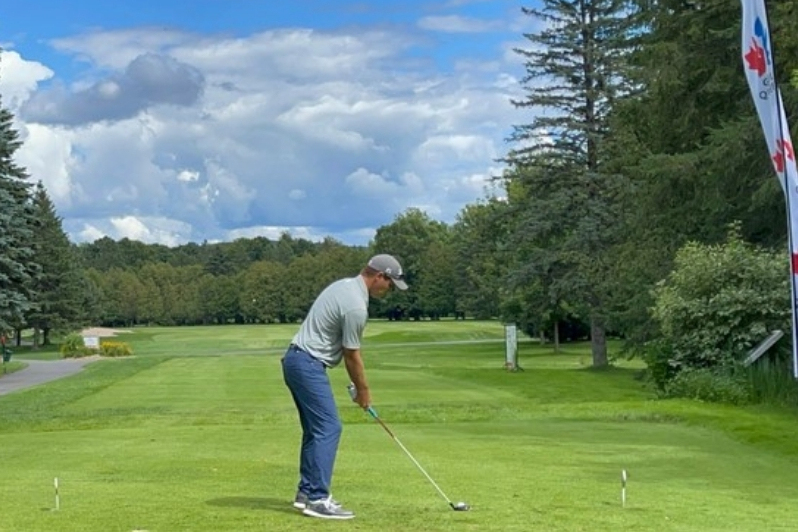 Victoriaville, August 13, 2022 – After taking control of the tournament the day before, Jake Scott added to his lead on Saturday in the third round of the Sani-Marc – Fenergic Canada Cup presented by the City of Victoriaville. The American knocked off six more strokes of par to bring his cumulative score to -21 (219) heading into the final round.

"I limited the mistakes again, so I only played one or two bad shots today. It was stress-free golf, just as we wanted, especially with the pin placements. We wanted to avoid difficult putts and we didn't make any bogeys. The last few holes were a little bit more complicated, but we made some good saves to make it to par," said Scott as he left the course.

With another strong performance on the fairways of Club de golf Victoriaville, the Ohio native now holds a four-shot lead over his closest challenger in the provisional overall standings, Ontario's Drew Nesbitt, who shot a 64 (-8), the best score recorded on the third day of competition.

However, this lead is far from sufficient to satisfy Jake Scott who wants to keep his foot on the gas on Sunday to achieve his goal of walking away with the coveted trophy. "It will be very important to keep the same strategy. We're going to play the same yardage with the same clubs on every hole and I think that's what will give us the best chance to win. If we do that, make some good putts, and take advantage of the par 5s, we should be fine," he said before heading back to the practice green. 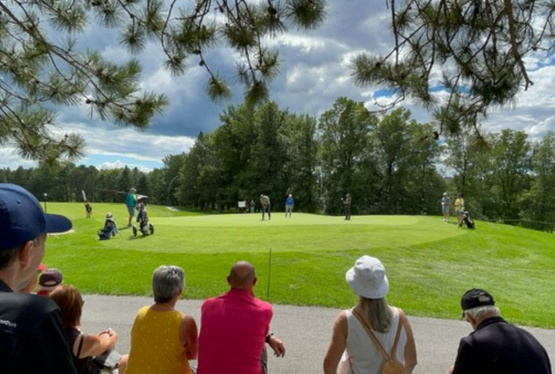 In addition to Drew Nesbitt at -17 (199), two other contenders are tied for third at -13 (203): Ontario's Lee Curry, who played his amateur years on the Golf Québec Tour, and Saguenay's Keven Fortin-Simard.

Curry, the 2015 tournament champion, invited himself to the party with a 65 (-7) and will want to take advantage of the par-5s to preserve his chances of joining the leader. "I'm back in the running! I got the putter out today, which wasn't the case in the past few days," he said. “I'm very happy with my round and my goal will be to keep the momentum going by getting as many birdies as possible on the par 5s.”

Meanwhile, Fortin-Simard looked back on a more difficult day, with a score of 72 (E) that cost him a position and a few strokes in the overall standings. "I didn't break anything today! I made a couple of bad swings, and it numbed me for quite a while. Days like that are flat, but I must expect it considering the little golf I play," he analyzed, without letting the situation discourage him.

"It wasn't ideal, so I don’t have much to build on, but we're starting fresh tomorrow morning! I hardly missed any tee shots and if I keep driving like this, I can be aggressive off the tee."

There will be 20 other Quebecers in action in the final round, starting with Max Gilbert (Saint-Georges) and Yohann Benson (Le Mirage), who are both tied for seventh place at -11 (205).

In the amateur division, the battle between Francis Rouillier (Victoriaville), three-time tournament champion in the category, and Brandon Rattray (Saint-Bruno) continued on Saturday. While Rouillier had a tougher day with a 75 (+3), Rattray took advantage of the situation to maintain his lead in the division at -1 (215), three shots ahead of his compatriot.

The fourth and final round of the Sani-Marc - Fenergic Canada Cup will begin at 7:45 a.m. on Sunday. A total of $125,000, including $25,000 for the winner, will be awarded at the end of the Sani-Marc – Fenergic Canada Cup, the largest independent tournament for Canadian professional golfers from the tours associated with the event: Vancouver Golf Tour, Great Lakes Tour, Toronto Players Tour, East Coast Pro Tour, PGA of Québec, PGA of Canada, and Golf Québec.

Admission is free throughout the tournament for spectators who wish to experience the unique atmosphere of this competition. It is also possible to follow all the action live on Golf Zoogle's YouTube platform.

Founded in 1920, Golf Québec is the provincial sport federation whose mission is to increase participation in golf and develop excellence. Golf Québec provides discovery and introduction programs such as First Tee – Premier départ Québec as well as core services such as the Rules of Golf, Course Ratings, World Handicap System, and the Québec Golf Hall of Fame. In addition, Golf Québec conducts regional and provincial championships to bring the local golf enthusiasts to surpass themselves and eventually reach the upper spheres of professional tours. For more information, please visit https://www.golfquebec.org.