Drew Nesbitt Builds a Slim Lead in the Opening Round 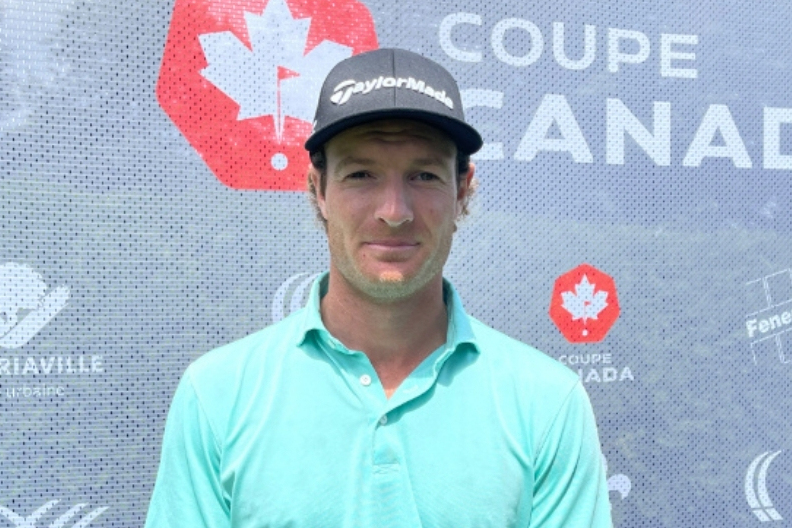 Drew Nesbitt Builds a Slim Lead in the Opening Round

Several Quebecers will be in the race for the title

The Toronto native exuded confidence on the Centre-du-Québec fairways, and he did not fail to demonstrate his intentions for the days to come. He played almost flawlessly to move to the top of the contenders, where he intends to stay as long as possible.

"It was a very good day for me with eight birdies and only one bogey on the eighth hole. I had a brain cramp and that was my only real bad shot today. Everything went well, especially on the back nine, and I was able to play a tight, error-free game. The plan is definitely not going to change, and I will try to do exactly the same for the next few days," commented Nesbitt after his round.

The 27-year-old will be challenged by compatriots Noah Steele, Austin Ryan, and Eddie Maunder, as well as American Jake Scott, all of whom shot six under par (66) in the opening round of the tournament.

Just behind them are Quebecers Étienne Papineau (Pinegrove) and Brandon Lacasse (Knowlton), who both recorded a round of 67 (-5) on Thursday to tie for sixth place with five other participants.

"I got off to a great start today, everything was running smoothly, and I was at -7 after 13 holes. However, I made some small mistakes that cost me bogeys on the 14th and 16th holes," explained Papineau, who was nonetheless encouraged by his performance in the opening round of this ninth edition of the Sani-Marc – Fenergic Canada Cup.

"When my long game and my short game click together, I know I'm capable of playing low scores like my early round. Unfortunately, I got away a little bit at the end, but it's no big deal. There's a lot of golf left and it's a good start anyway!"

No less than 66 golfers from Québec are in action in this tournament, which will conclude on Sunday. Among them, five are tied for 13th place at -4 (68), including Alexis Clément (Drummondville). The latter ended his round brilliantly by firing his 75-yard approach shot straight to the bottom of the 18th cup for an eagle.

"I didn't putt very well today, and my caddie joked around, telling me to make my shot in order to avoid having to take my putter out. In the end, we made it perfectly and we were very happy! We'll try to build on that for the future," said Clément, smiling after his round.

Several athletes also stood out on the amateur side on Thursday. This is the case of the host club's golfer and defending champion of the category, Francis Rouillier, who is in the lead with a round of -3 (69). He will not only try to maintain his title, but also to win a fourth one after those of 2013, 2018 and 2021.

The 156 participants, 136 professionals and 20 amateurs, will return to the tee early Friday morning to play the second round, after which a cut to the top 70 and ties will be made to advance to Saturday and Sunday.

A total of $125,000, including $25,000 for the winner, will be awarded at the end of the Sani-Marc – Fenergic Canada Cup, the largest independent tournament for Canadian professional golfers from the tours associated with the event: Vancouver Golf Tour, Great Lakes Tour, Toronto Players Tour, East Coast Pro Tour, PGA of Québec, PGA of Canada, and Golf Québec.

Admission is free throughout the tournament for spectators who wish to experience the unique atmosphere of this competition. It is also possible to follow all the action live on Golf Zoogle's YouTube platform.

Founded in 1920, Golf Québec is the provincial sport federation whose mission is to increase participation in golf and develop excellence. Some of Golf Québec’s core services include the Golf in Schools Program, First Tee as well as Get Linked initiatives, the Introduction Tour, Junior Golf Development Centres (JGDC), Rules of Golf, World Handicap System, course rating services, as well as the Québec Golf Hall of Fame. In addition, Golf Québec conducts regional and provincial championships to bring the local golf enthusiasts to surpass themselves and eventually reach the upper spheres of professional tours. For more information, please visit https://www.golfquebec.org.