The Machinex Open is back at Club de golf Laurier 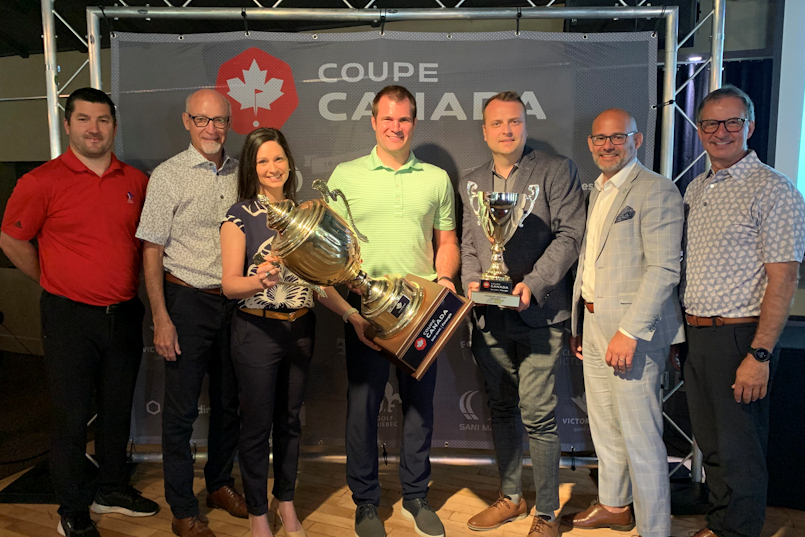 Victoriaville (Centre-du-Québec), June 14, 2022 – The ninth edition of the Sani Marc – Fenergic Canada Cup, presented by the City of Victoriaville, will be held from August 11 to 14, 2022. The addition of new high-impact partners will solidify an already well-funded organization in preparation for the tournament, which will once again be one of the most challenging to be held on the Club de golf Victoriaville course.

As announced last winter, local company Fenergic joined the team as the event's title partner, while Golf Québec is responsible for organizing the competition, which will gather a maximum of 156 players.

"It is with great pride that Fenergic joins its name to the Canada Cup in the beautiful region of Victoriaville. Access to sport for young people and the opportunity for everyone to develop their full sporting and human potential is of paramount importance. We hope that this partnership with the Canada Cup will continue to fuel the passion for golf," mentioned David Turcotte, Fenergic's Sales Director.

"We are extremely proud to be associated with this tournament, which is already renowned throughout Canada. We hope to help the organizing committee continue to raise the standards of the event and provide an even more complete experience for players and spectators alike," said Eric Couture, Golf Québec’s Competition Director.

In addition, new agreements were made with the PGA of Québec, the Toronto Players Tour (TPT) – Ontario, and several PGA of Canada zones to ensure that the best possible contingent is hosted during the event.

"Every year, the Victoriaville crowds liven up the show. Players from all over notice the passion of those in attendance. Thank you to Golf Québec for working so hard over the past few months to move the event forward. Presenting an event of this magnitude takes a lot of volunteers who are responsible for just about everything. My hat is off to all these people," explained Jerry Séguin, Chairman of the Organizing Committee.

The title contenders in this ninth edition will compete for a total prize purse of $125,000, including a $25,000 purse to be awarded to the champion. The 70 top finishers (and ties) will make the cut after the first two rounds.

Several Québec professionals will be present at the tournament such as Yohann Benson and Keven Fortin Simard (top Quebecer in 2021), Max Gilbert, Brandon Lacasse as well as some veterans such as Marc-Étienne Bussières and Dave Levesque. Former champions will also join the field, including Eric Banks (NS), Brendan Leonard (ON), and Lee Curry (ON).

An amateur category including some fifteen golfers will also be added to the professional division. The reigning amateur champion, Francis Rouillier (Qc), from the host club, will be present for the occasion. At least six local golfers will also be participating, including Maxime Chabot and Thomas Vallières. The latter are already qualified by virtue of their performance at the Victoriaville Golf Club Championship. Jean-Michel Paré, also from the host club and amateur champion of the event in 2017, will be part of the field.

"We are proud to welcome the country’s best golfers to Victoriaville for the Sani Marc – Fenergic Canada Cup. Once again, this year, the City is pleased to support this major sporting event and invites golf fans to come and watch this challenging tournament on the Victoriaville Golf Club course," said Victoriaville Mayor Antoine Tardif.

In addition, through a partnership with GolfZoogle, the event will be streamed live and for free on the company's YouTube platform. Live scoring will be available to provide a revamped experience for spectators, both on the course and online.

As is tradition, Pro-Am events presented by Desjardins, with a portion of the proceeds going to PROCURE, will take place on August 9 and 10. "Desjardins is very pleased to see new sponsors joining the Canada Cup and we are proud to renew our partnership with the event. This is a great continuity in which Desjardins is happy to participate," declared Benoît Bélanger, Director of Desjardins Group.

Finally, thanks to an agreement with Sani Marc, access to the site will be free during the four rounds of the competition.

"The association between Sani Marc and the Canada Cup is a natural one and we are very proud to do business with the event this year. The tournament allows us to welcome many up-and-coming talents, and this is what motivates us even more to get involved," concluded Mylène Lavigne, Director of Legal and Corporate Affairs at Sani Marc. 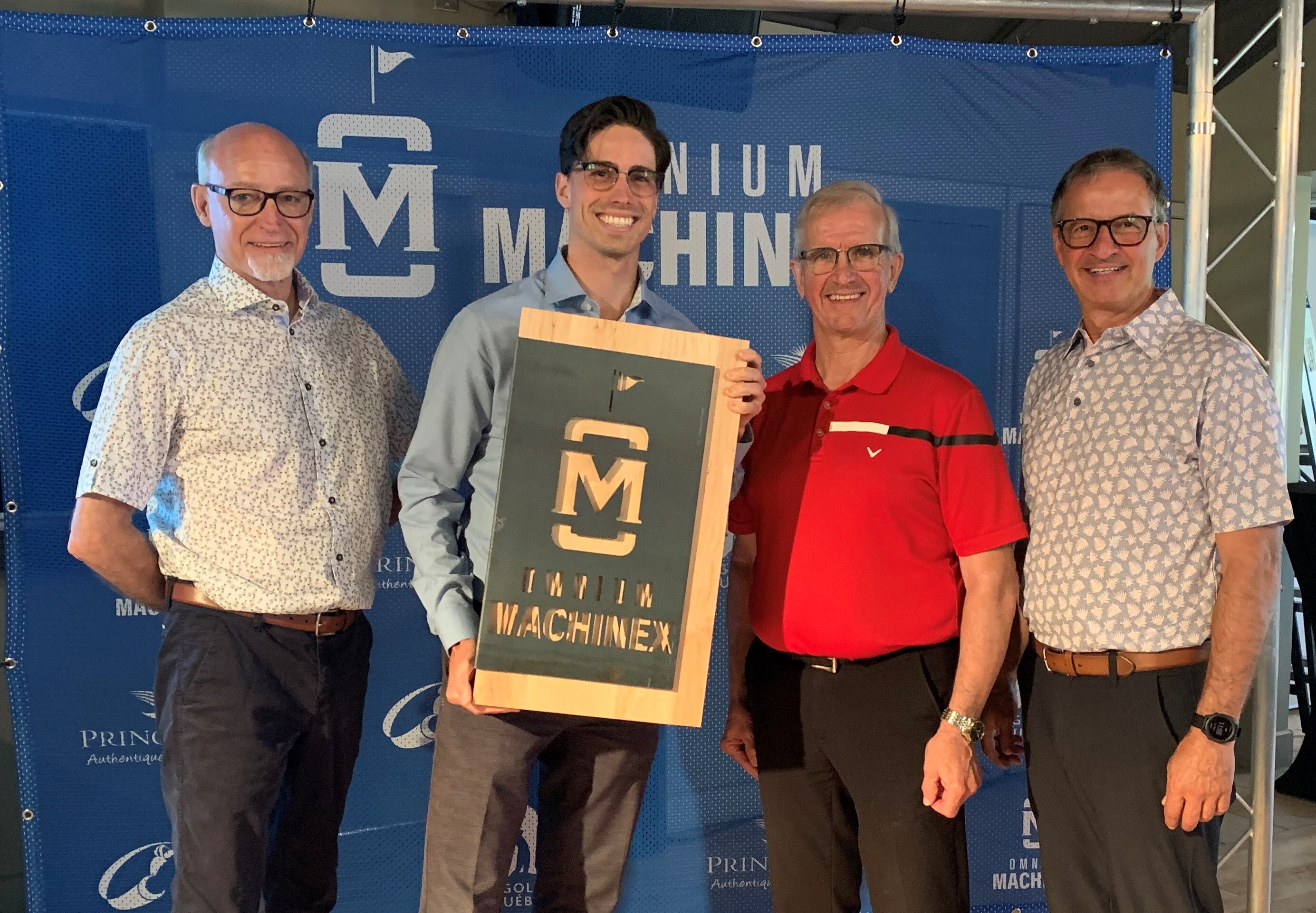 Second Edition of the Machinex Open

There will also be plenty of action at the Laurier Golf Club in Princeville this summer, with the presentation of the second edition of the Machinex Open to be held from July 22 to 24.

The tournament, presented by the City of Princeville, will be played over two rounds, and will offer a minimum of $20,000 in prize money.

"The City of Princeville is enthused with its partnership with the Machinex Open. We want to contribute to the growth of golf in Québec, especially with the presentation of the second edition of the event. We look forward to welcoming all the golfers who will be attending, and we invite them to visit our beautiful region. A special thank you to all the organizers and volunteers who work to make this event a success," added Princeville Mayor Gilles Fortier.

The event will also serve as a qualifier for the Sani Marc - Fenergic Canada Cup, where the top six non-qualified professional golfers will receive an exemption, as will the top four non-exempt amateur players.

"One of the values at Machinex is passion. This value led us to partner with the Open to bring this passion for golf to our region. Thank you to the volunteers who are essential to the organization of such an event. We intend to continue this partnership for the next few years," commented Jean-Michel Paré of the Machinex team.

The champion of the first edition, Vaita Guillaume, will be defending his title in 2022.

Several other activities are scheduled for the weekend, including a long-drive competition on July 22, as well as a Pro-Am event.